Home Dogs Digital Stories Abandoned Puppy with Cleft Palate, Rescued and Grows Up Tough Like His... 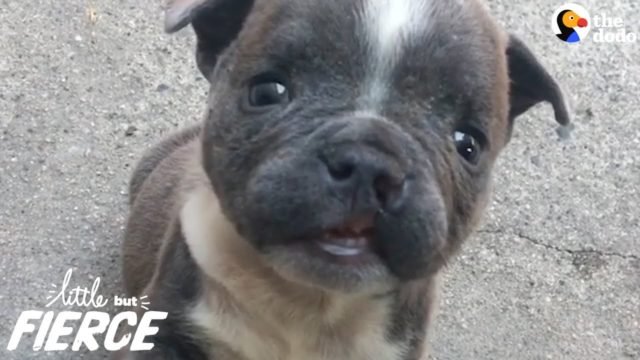 This little puppy was left alone by his breeders back in Los Angeles when he was only one day old. He has a cleft palate.

Dogs like him need a lot more attention and care when it comes to feeding because they can’t suck milk from their mothers. When this happens, it can be dangerous because the fluid will go on their lungs. Having him tube-fed is one of the efforts you should do when feeding a cleftie dog which is probably the main thing his breeders avoided. The worst thing was he was nearly taken down because of his cleft.

The puppy, which was later named Earl Gray, was rescued by Road Dogs & Rescue in Nikki Carvey’s lead. In that foster home, Earl became tough. Nikki even claimed that like other cleftie dogs, Earl could aspirate so quickly that everyone was rooting for him and watching him grow.

Earl built an immediate relationship with his rescuer despite his young age. Nikki, being with a dog for a couple of months and being attached to it kind of considered Earl as his son. But she stated that since it was not practical for her to have another dog, she had to give him up to someone else.

It didn’t take long for Earl to find a new home. Craig and Virginie Fields saw him on Instagram, and they immediately fell in love. With that, Earl was adopted by the two. He is now living in abundance with his new parents along with a pack of dogs in their home in New York.

He was shy at first but slowly became comfortable, Craig said. Earl grew up to be a very active dog that likes chasing and barking at his dog siblings and when his owner sings.

“With all the bad that we deal with and coming home and seeing him, you forget about all the bad.” Craig proudly said as Earl gives them the best comfort every time they get home. “He just makes you happy.”

Learn more by watching this video:

Check out these stories of other dogs rescued just in time:
Two Dogs that Were Almost Killed
Pitbull Rescued Just in Time