Garbanzo is a sweet, gentle-mannered puppy who never had a real home. He has always lived in a shelter and never experienced what it feels like to live with a loving family. What makes him quite “unadoptable” was the fact that he is blind. But thanks to Rocky Kanaka and his show “Dogs Day Out,” Garbanzo gets an incredible treat: to experience the beach for the first time. 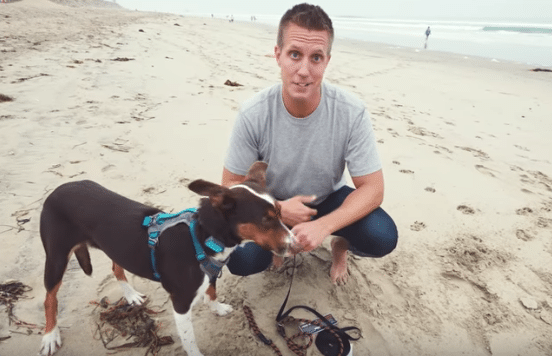 Not all dogs get a chance to live with loving families and warm homes. Some of them remain in shelters, waiting for their chance to get picked by a potential adopter. And when a dog suffers from a disability, the prospects for adoption becomes even slimmer.

Such is the case of Garbanzo, a one-year-old border collie mix. Garbanzo is totally blind. Experts suspect that he lost his eyesight due to an illness when he was younger. But that didn’t kill Garbanzo’s spirit. He is still affectionate and adorable, although he does tend to get nervous at times.

Rocky Kanaka, pet rescue advocate, and TV host decided that Garbanzo is going to be one lucky pooch. He wanted to treat Garbanzo to his first beach trip ever. And the dog’s reaction was epic!

Garbanzo’s day out was planned just in time on his first birthday. Rocky prepared a cake for him and threw him a mini-party with other dogs and shelter staff who come to love him.

Next, Rocky took Garbanzo to the dog beach. It was the blind dog’s first time to smell the ocean, feel the sand and run the lengthy stretch of the shore. Rocky attached Garbanzo to a 30-foot leash so that the blind pooch could freely enjoy the water.

Garbanzo may not be able to see what the ocean looks like, but he felt it. He indeed had a great day out, and for him, it’s probably one of the best days of his life. You deserve it, Garbanzo!

Watch Garbanzo’s epic day at the beach on the video below.

Thanks to Rocky Kanaka.