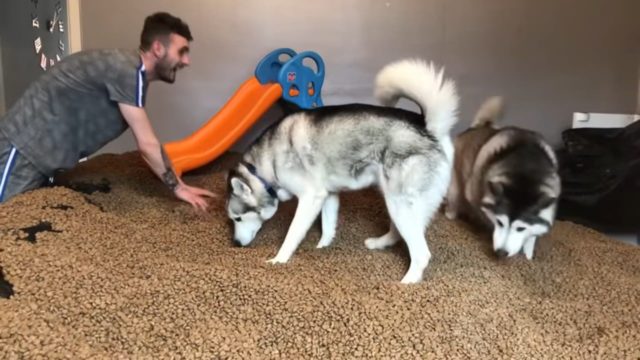 In an overwhelming act of charity, this man decided to fill his living room with 1,000,000 dog biscuits. His name is Aaron Wallman, and he lives in the UK. He owns two Alaskan Huskies, named Millie and Rupert, who are internet famous.

Aaron is the owner-operator these dogs social media accounts, Milperthusky. With these accounts combined social media following of nearly two million, just from the thousands of YouTube views, gained, he must be earning a lot of money. In an extreme act of sharing to other pups what his Alaskan Huskies are making, he did what no other dog owner has ever done before!

Aaron computed how many bags of dog food he would need to buy to get a million by asking his son to count how many biscuits there are in a one-kilo package. Based on that number, he went to the store to purchase 65 bags that contained fifteen kilos each. That amounted to an astounding million! He went to the store, bought the food, and loaded it into his truck to bring it home.

Filling up the living room

He piled the dog food bag in the living room and lined the carpeted floor with black garbage bags. Then Aaron opened and poured out every single bag onto the plastic lined floor to create a mountain of dog food. It took a while for him to fill up the area, and the dogs were hungrily waiting as they watched their owner pouring out the biscuits.

These two Alaskan Huskies were held at bay by a dog gate. One eager dog was standing up while the other pooch was lying on the floor, perhaps exhausted from waiting to eat! When Aaron finished piling up the dog food, there was a biscuit that fell within reach of one Husky, who ate it and wailed, as he could see that there was more to eat!

The dogs were finally allowed to enter the room, and they ran to the top of the pile. One pooch decided to dig while the other one ran around the sides of the mound to assess how large it was. These two Huskies checked the mountain of dog food first before they feasted on their unlimited food!

Aaron had stated in the YouTube video description that the dog biscuits are for charity. He wanted to pile it up first in his living so he can see the reaction of Millie and Rupert. Watch this dog video to see the priceless reaction of these two Alaskan Huskies when they got a million dog biscuits!