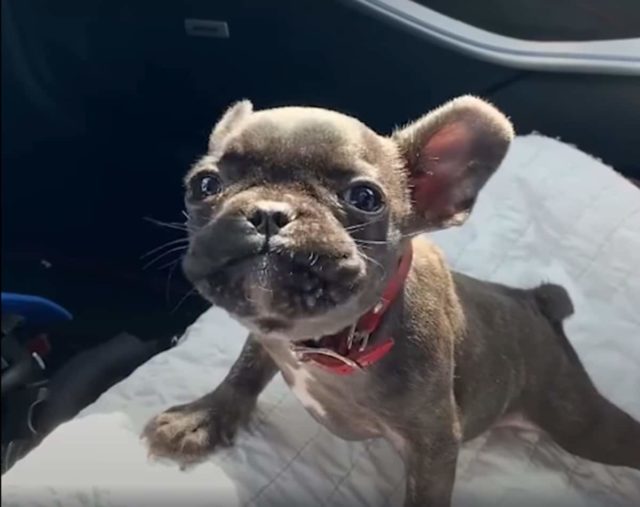 Frenchie Mercury is a French Bulldog who was born with a major congenital defect on his spine. Mercury’s hind legs are not strong enough to support his body, which gives him a difficult time getting to places he wants to see.

Mercury’s dad, Chris, shared with The Dodo that he immediately placed Mercury in his little wheelchair as soon as he picked him up from the shelter. Chris recalled that he ordered the pup’s wheelchair before he even brought home the puppy.

Chris was so proud because Mercury started moving as soon as he placed the puppy on his training wheels. Mercury’s fur mom, Mariesa, recalled that Mercury barely moved an inch when their puppy used his wheelchair for the first time.

Mariesa and Chris were both in tears and cheered Mercury for showing such marvelous progress. Mariesa proudly shared that Mercury now runs over dogs and even ramps.

Mariesa shared with The Dodo that she and her partner takes care of 17 senior dogs with special needs. Many shelters and veterinary hospitals contact them if they have a dog that needs help.

Chris said that they have always had older dogs under their care, and it is their first time having a puppy. Mercury is a big ball of energy, but Chris shared that the little pooch somewhat picked up a bit of the mellow energy that their senior pups have.

Chris shared that Mercury’s ability to walk improved because the wheels allowed him to have the proper posture he needs. The wheelchair keeps Mercury in an upright position, which helped his hind legs build muscle.

Chris recalled that Mariesa sent him a video of Mercury while he was away at work. Chris remembered feeling so happy because Mercury walked up the ramp on his own for the first time, and he knew from that moment that Mercury would get better as time progresses.