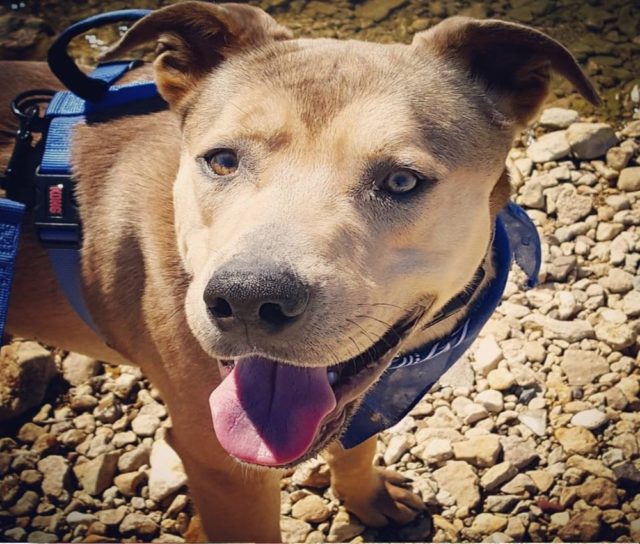 Echo Lake Park is a known dumping ground for unwanted dogs in Fort Worth, Texas. Just like any other days that Judy Obregon experiences when making rounds at the dumpsite, she discovered a motionless stray dog that was lying on the floor.

Judy is recognized as a local “dog lady” for her efforts in ensuring animals’ safety. Aside from spending time at the dumpsite looking for survivors among canines abandoned at the site, she rescues all sorts of wounded animals with different stories to tell.

Some dogs that Judy rescued were either exploited by individuals involved in illegal dogfighting activities or those who suffered in the hands of abusive owners. Judy also finds dogs who were simply thrown out like some garbage because their owners do not want the responsibility of having pets.

Blue 💙 rescued from Echo Lake ( Ftw , Tx ) Visit with Blue The sounds of water flowing , and birds chirping is all good in Blue's world today.. the sounds are all comforting . Imagine what my life would have been like ? Had I not been found .Just a week ago or so , his world on the streets of #EchoLake in Fw , Tx wasn't so great to him .. trying to survive . Thankfully we got to him on time ! You're survivor ..is enjoying the sounds of a much better life ahead all Thanks to you .Blue 💙 is seeking a foster home in the Dfw , Tx area so he can relax , and enjoy human kindness , fur friends to play with and have the ability to learn what us good humans are all about . Currently he is at our vet and still needs help with his current and future medical bills ( neuter ) . He is utd on vaccines , hw – and current on hw prevention. Blue does well on his leash ( as you can see ) dog friendly too .Donations directly to his vet at Dr . Gibbs 817-294 -9798 would be greatly appreciated or https://paypal.me/taoanimalrescueTo Foster Blue please contact us at www.taoanimalrescue.com #EveryAnimalMatters #taoanimalrescue #fosteringsaveslives Fostering is so rewarding and free ..Original / Previous Post : https://m.facebook.com/story.php?story_fbid=1339254566137749&substory_index=0&id=184946124901938

Posted by The Abandoned Ones "Saving Animals in Danger" on Friday, February 24, 2017

Judy, the founder of The Abandoned Ones or TAO, cares for abused dogs. Her rescue organization gives surviving unwanted canines another opportunity for a better life by helping them find their new homes.

During Judy’s search for surviving or dying dogs, she often finds dead dogs among barely. When Judy found a lifeless dog on the ground, she was sure that it was another one of the unfortunate ones who did not make it.

When Judy took a closer look at the pup in front of her, she saw it struggle to breathe. As soon as she found signs of life, Judy quickly rushed the dog to an animal hospital.

The doctors believed that the dog, later named as Blue, ingested poison because the rescuers who discovered the dog found bags that seemed to have it. Luckily, Blue’s saviors saw him in the nick of time, or he would not survive the ordeal at all.

During Blue’s first few days of stay at the clinic, he was so weak. However, after receiving love, encouragement, and medical attention from employees, Blue recovered miraculously.

Source: The Abandoned Ones “Saving Animals In Danger” via Facebook