Home Dogs Digital Nameless Dog Finally Has A Name And A Family That Would Love... 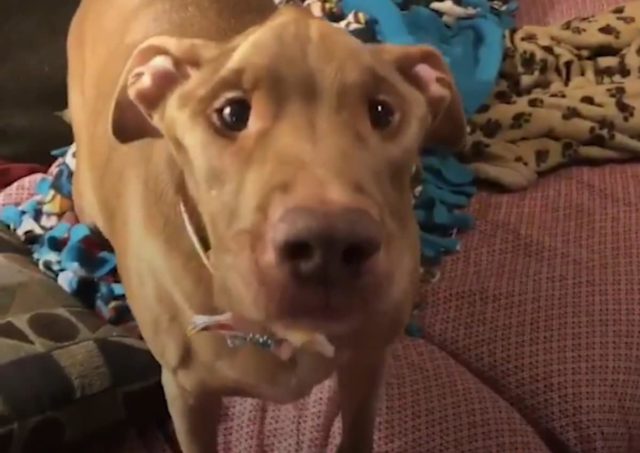 One woman was volunteering at an animal shelter when she came across an emaciated Pit Ball called Unknown. Sherry felt so heartbroken as soon as she saw how depressed the Pittie looked, and she knew that she had to help her.

The pound chose not to name the dog because they know that she was not going to survive for too long. Unknown suffered from an auto-immune disease, she was so emaciated that her ribs started to protrude, and she looked like she had given up on life.

Dog Who Wasn't Supposed To Survive Is Completely Transformed By Love

This pit bull was called "Unknown" at the shelter because they didn't want to name a dog who probably wasn't going to survive. But then she met her new mom and became the happiest, most beautiful girl — her name is Destiny 💖

Sherry knew that Unknown would not stand a chance because not only that she shelter was full, Unknown was also a sick, depressed Pit Bull mix, which many people often ignore. Sherry went home that same night, but she could not shake the nameless red dog in the Kennel 251 off her mind.

Sherry went back to the shelter the next morning and brought cheese and treats with her. Sherry tried to earn Unknown’s trust by tossing some treats to her, and the dog eventually trusted Sherry enough to eat the treats on her hands.

Sherry knew that Unknown was the one for her when the dog laid down right next to her and fell asleep while she was busy petting her. Sherry immediately processed Unknown’s adoption papers and changed her name to Destiny.

Sherry recalled that Destiny was a bit hesitant to come inside her new home, but her curiosity won her over and slowly walked inside Sherry’s house. Sherry was dead set on making sure that Destiny would feel all the love she deserves.

Sherry said that Destiny was only 39 pounds when she rescued her. Sherry made sure that her four-legged fur baby would get small yet frequent meals, and Destiny gained a lot of weight within six months.