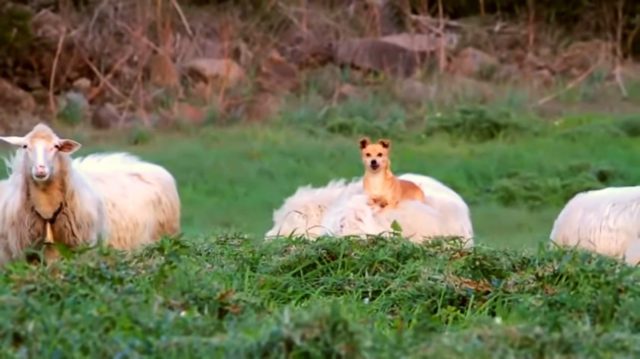 The soft white fleece of a sheep became the comfortable seat of a dog. Aside from sitting on the back of the farm animal as it grazed, this doggie did more. It rode on top of the sheep in the same manner as an ancient reigning emperor.

This brown, herding dog did his task to guard the sheep as well he could. As the sheep lingered in a grassy knoll, he sat on one that was resting be able to be high enough to see the whole herd. After the sheep grazed in that spot, they went to another part of the field. This doggie rode on top of the same one he used as a seat!

A herding dog typically runs beside these farm animals when they walk. These dogs keep the animals together, making sure that none wander off or linger, by moving beside them. Sheep do get lost, and these herding dogs prevent that from happening aside from guiding them to go back to their fenced area.

At first glance, this doggie may seem to be merely enjoying the comfortable seat. It will also look like this pooch was riding on the back of one, so it wouldn’t have to walk. That high seat made the dog have an excellent view of the herd. This smart dog accomplished the tasks of guarding herding the sheep with the least amount of effort.

This video filmed in the municipality of Fordongianus, Italy. It clearly shows how this little pup rode on top of a long-haired sheep. It was a chilly December day, and the sheep’s long fur must have provided its canine friend with the warmth it needed. You’ll love to watch this pooch go about its tasks with such glamorous style!