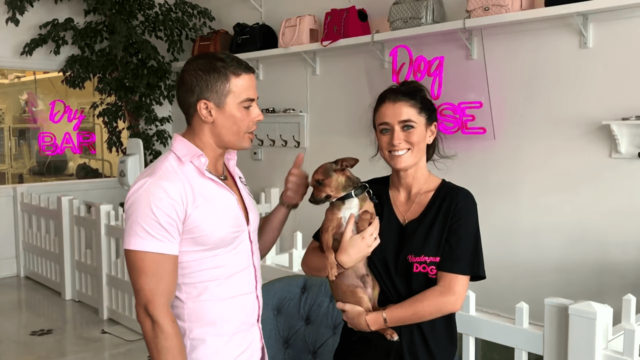 If you follow pop culture even just a little bit, you are sure to be familiar with the ‘Real Housewife’ reality star Lisa Vanderpump. What most people don’t know about her is that she is not only one of the crazy ladies from the hit show. She also happens to be a dedicated doggie advocate who has made it her mission to help make a better place for dogs. One of the ways she has done so is through opening a rescue center that is unlike any other shelter there is.

You wouldn’t think that this bright pink building in Los Angeles functions as a shelter for rescue dogs at first glance. As you enter, you would think that you were at a posh boutique salon instead of a non-profit foundation that help rescue dogs get adopted. The area that they have for you to meet the doggies available is as glamorous as it can be. With chandeliers and comfy couches, this place is the ideal spot to get to know the pooches there.

The Vanderpump Rescue Center is decked out with everything that a dog could ever want or need. They even have some doggie merchandise along with a bakery full of dog treats you can buy to help out their fundraising.

All for the dogs

This center rescues dogs all over and even gets the dogs from high-kill shelters so that they don’t get euthanized. However, this is only a small but incredible part of what the Vanderpump Dogs Foundation is up to. Since its founding back in 2016, they have already made a considerable dent in trying to stop the overpopulation, neglect, and abuse that dogs endure.

They have been doing this through the best way they could to make it a lasting change – education and legislation. This foundation is already to thank for making it a federal crime to mistreat a dog in the US, and they are still striving to do even more for the dogs as time goes by.