Dogs are just the absolute cutest and their mannerisms and their quirks make them even cuter! One dog named Ruby, who goes to a doggy daycare in Ontario, has the habit of petting her fellow canine companions! Another dog owner, whose dog goes to the same daycare, started filming Ruby and she’s been an internet sensation ever since!!

Dogs behave in the cutest ways. We already saw that with one doggo that went viral because she finds the fluffiest dogs in daycare so she can nap on them. Another canine who became an internet sensation is Ruby, a German shorthaired pointer that shows her affection for other dogs by petting them!

Ruby goes to The Den Doggy Daycare in Burlington, Ontario, together with her brother Miles. It was there that the owner of one of the other dogs noticed Ruby’s strange but adorable behavior a few months ago.

“She does it every time she is in. We think she wants attention!” dog Lexy’s owner Alanah Lorraine told the Dodo about Ruby petting and patting other pets at the daycare.

When one woman filmed Ruby the dog petting other dogs, her video instantly became popular on the internet People couldn’t get enough of Ruby petting other dogs! The other best boys and girls at the doggy daycare often seem confused, befuddled, and bewildered by Ruby’s actions. Their reactions are priceless! However, they still seem to enjoy Ruby petting them with her paw.

“Most dogs aren’t bothered by it and just let it happen,” Alanah said. She started filming Ruby’s interesting way of showing her love for others every time she saw it happen.

Then, she compiled all of the clips together and posted the video on TikTok where it got more than 620.4k views and over 144.8k likes at the time of writing. The video was also shared by the incredibly popular We Rate Dogs Twitter account and got 7.7 million more views!

According to Alanah, she thought that the video would be adorable. However, she never imagined that it would be as popular as it is.

When dogs paw at each other and their owners, this can mean a lot of things. For instance, they might want attention or for others to play with them. Also, doggos can start pawing when they need something else, like food and they’re trying to “subtly” get your attention.

But, at the end of the day, the explanation can be simple: dogs are pack animals, they want to feel connected to others, so they reached out with their paws to touch other dogs and people. 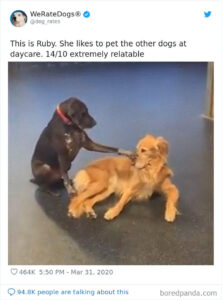 Thanks to Alanah’s recording the world gets to see how awesome Ruby really is! Ever since the TikTok was made, Ruby became an instant celebrity on TikTok as well as on Twitter! She is living the dog fame dream just doing what she does. Apparently when dogs paw at their owners as well as one another, they either want you to do something for them or their just wanting your undivided attention. All in all, dogs just want to be loved and if they need to literally reach out and touch you in order to get extra lovin, they’ll go to all the lengths to do it!

Thanks to those at Bored Panda and Jonas Grinevičius for the awesome story!!