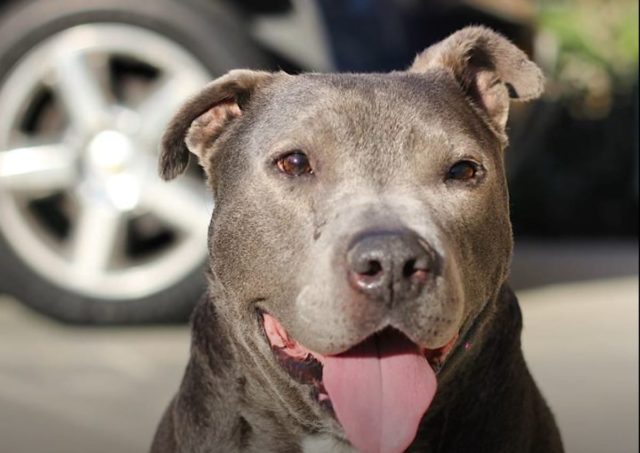 Ziggy is a Pit Bull who loves to rub his adorable little face on the carpet. He would stick his butt up in the air, and his front paws would be right behind him.

Emily Vargas, Ziggy’s fur mom, shared that she would always find her dog smooshing his face onto the rug as soon as he wakes up and finishes his meals. Emily called it sharking because it looks like it is something that a shark would do.

This Pittie's The Cutest, Biggest Baby Ever

Ziggy, Emily recalled, was the most uncoordinated dog she had ever met. He tries his best to keep up with his doggy sister during playtimes, but he always fails and often stumbles.

Ziggy is a clumsy dog who often looked like a turtle lying on his back because it takes the Pittie a while to regain his balance every time he falls during playtime. Emily said that Ziggy always makes her laugh every time he plays with his sister because of how he looked so goofy.

Emily shared that Ziggy loves to sleep for five hours straight in the middle of the day. Ziggy would always fall asleep anywhere, and Emily would tuck him in with a cozy blanket to keep her furry best friend comfortable.

Emily said that Ziggy loves hanging out on the couch, but he would only put his front paws up because he wants Emily to help him get up on it. Ziggy would not stop staring and grunting at you until you assist him on the sofa.

Emily recalled that she would get notifications of Ziggy from three years ago, and she was proud of how much her dog has changed throughout the years. Emily said that it took some time for Ziggy to warm up, but his adorable quirks slowly started showing as time passed.