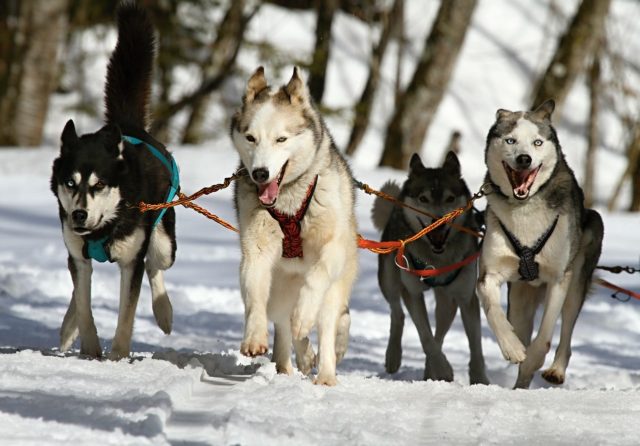 Three years ago, Indy, the Alaskan husky, lost his vision in one of his eyes. Despite that, he still trained to run in a race in Minnesota together with Popcorn, another member of their sled dog team. However, soon, Indy’s other eye went blind too.

It took one year for Indy to adjust to his new condition. After that, the seven-year-old dog returned to running again. This time, Indy only joined recreational races for him to get comfortable with running without vision.

Here's our boy Indy before the 2nd leg of the Gunflint Mail Run yesterday. At 100 miles it's by far the longest race he'…

Frank Moe describes Indy as a happy-go-lucky pup. He said that they almost turned Indy into a house pet. They only changed their minds after seeing that running is all their dog wants to do. According to Frank, Indy started to join longer races last season. Soon, the blind pooch will become as strong as his teammates.

Frank explained that Indy is the “wheel” in their dogsled parlance. This means that Indy is positioned behind all the other dogs and runs in front of the musher. The pup with this role has to be one of the strongest in the team.

Perfect conditions on the Beargrease Trail.

Recently, Indy finished the 100-mile Gunflint Mail Run that was held in Cook County. The race had two 50-mile legs, which had a few hours rest in between. Frank commended how strong Indy was. He said that the blind pup’s strength is comparable to the other dogs. It thrilled them to see the old Indy back.

Indy will join another marathon soon. He will participate in the 300-mile race in North Shore. Frank said that he is not worried if Indy could keep up during the strenuous race. He knows that as long as Indy gets some love, attention, and treats at the end, Indy is good. These are the only things that matter to the energetic and joyful dog.