On the brink of death, these two dogs showed to everyone in the world what real love meant.

The two dogs were scheduled to be euthanized at a dog shelter because no one wanted to adopt them. Kala is a mix breed of hound and was 11-months old at that time.

Keira, on the other hand, is a boxer mix and was a year older at the time of their supposed death. Both were too young, but they were already neglected by the shelter home they once belonged to.

This prompted a dog rescue group named Angels Among Us Pet Rescue to post on their social media about the two dogs’ ordeal.

THEY ARE SAFE!!! There are no words to tell you how happy we are that these two best friends are safe and together! …

Kala and Keira were seen hugging in the photo. Apparently they were trembling in fear because of the sad reality that they would face death soon.

Needless to say, their photo went viral and caught the attention of several well-meaning dog lovers. Quick on their feet, a lot of potential adopters contacted the center to have both dogs spared because they would adopt both.

Among the applicants were two best friends based in Arizona, and they were given a chance to adopt the two dogs together.

Wendy, one of the two new owners of the dogs, recalled that she first came across a story about Kala and Keira when she read about their ordeal in People magazine.

Wendy recently lost her two dogs because of old age, and she thought it would be wise to adopt new dogs because she already missed the feeling of having dogs. 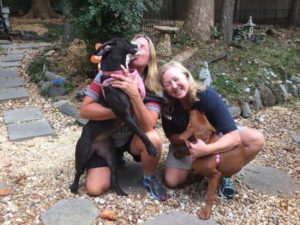 She then told her friend about the two dogs and both agreed that they would take the two because they knew how close the dogs were to each other.

For Wendy, adopting Kala and Keira was the best decision she could make. She shared that more than saving the dogs, Kala and Keira brought a new meaning to her life after losing her two dogs.

Credits to Angels Among Us Pet Rescue.